SPACE for Jesmond have submitted a petition to Newcastle City Council signed by over 180 people who support the currently-shelved closure of Haldane Road bridge, which was to make the streets safer for local residents and those walking and cycling through the area. 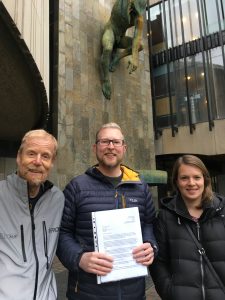 The bridge, situated in South Jesmond ward and linking Osborne Road to existing cycling and walking routes, was to be closed to motor traffic in order form a key cycling route through Jesmond. The area is the location for two large private schools and a route to West Jesmond Primary. The narrow bridge is heavily used as a rat-run for drivers wishing to avoid traffic lights and vehicles regularly mount the pavement while congestion is caused due to high levels of school run traffic heading in opposite directions. It is also a key route for those cycling into the city and those who walk to the schools.

As previously reported in the Chronicle, the council engineers’ closure plan, part of a £1 million programme of improvement in Jesmond, has been shelved by local councillors who are reluctant to impact on residents in the area, fearing a shift in motor traffic to adjacent streets.

Our petition shows that there is actually a strong level of support from residents in the immediate vicinity to close this bridge to motor traffic; over 50 signatures were received from residents living close to the bridge during our door-knocking campaign.

SPACE for Jesmond’s position is that the council should not renege on their their commitments to increase cycling and make residential streets safer. The council have bid for and received a substantial pot of funding from central government on the basis that they will support people to travel sustainably and make streets safer and more pleasant. It makes little sense to on the one hand commit to reduce car dependency and on the other to say that those commitments will not be put into action because they must facilitate drivers.

Petition signatory Martin Edney highlights the root of the issue:

“The key to this is the school run. The worst problems in this area are around school start and end times, and there are several schools in the area. If we can get the schools to work with parents to reduce school run traffic through these narrow residential streets, it will improve things for vulnerable road users. It should be a no-brainer, since many of those vulnerable road users are also on their way to and from those schools.”

We completely agree. They key here is to reduce the traffic in the area by directly addressing the real issue – large numbers of children being driven to and from the school gates – and providing safe walking and cycling routes are a key part of making that reduction.