There are elections for the Council happening in Newcastle on the 3rdMay 2018. This year new ward boundaries are being introduced, and Jesmond residents have three votes to elect candidates in their ward.

With lots of new faces we’re keen to find out what the candidates think, in particular about how they plan to address transport-related issues in our community. To do that we’ve come up with five statements or pledges and we have asked each of the candidates whether they support these or if not what they plan to do instead.

Below the candidate’s responses, which we’ll update as they are received, we have also written a bit of background about why we have chosen these particular statements.

Please keep checking back in advance of the elections on 3 May and if one of your candidates has not yet answered please do encourage them to do so. The very least we should expect from future local councillors is a willingness to engage with local residents and share their vision for the future of Jesmond.

THE SPACE FOR JESMOND PLEDGES

The five pledges we have asked candidates to support are:

Please see below for more on why we have chosen these pledges and what they mean in practice.

We are contacting all the candidates and will post their responses below when we receive them. The candidates are listed in the order they appear on the Statement of Persons Nominated on the City Council website

WHY HAVE WE CHOSEN THESE PLEDGES?

Pledge 1. Streets that are safe, and feel safe, for children to walk and cycle to school, to the shops or to the park.

Everyone should be able to travel safely whether they walk, cycle, use public transport or drive and should feel safe while they do so, but this isn’t currently the case in Jesmond. Often, traffic is fast and it isn’t always easy to see due to the high level of kerbside parking and high sided vehicles.

Children are less able to look out for themselves and are more likely to be injured or even killed in the event of a collision, so focusing on children, whether travelling independently or with an adult, is a good way to make Jesmond safer for everyone.

Children are also more vulnerable to air pollution and children driven to school can be subject to up to ten times worse air quality than children who walk or cycle, and the extra vehicles make it harder for everyone else who needs to drive. Children who walk or cycle also get the benefit of the exercise – with the NHS recommending that children need at least 60 minute of moderate or vigorous exercise every day.

When we say streets ‘that are safe and feel safe’ we mean streets where children can and do walk and cycle to school, to shops or to the park, and where parents feel comfortable to let them. Ultimately it will be for local residents, and in particular parents, to judge whether a street is safe for their children to walk and cycle. We hope to work with Councillors who sign up to this pledge to engage with local parents to determine what is needed to achieve this objective.

While it is right that children are the priority, the map below shows the locations of where people have been killed or seriously injured in the Jesmond area in the last 10 years (2008-2017). As with other UK cities including Liverpool and Edinburgh we hope Newcastle will also adopt a “Vision Zero” target i.e. zero deaths or serious injuries on Newcastle’s roads. 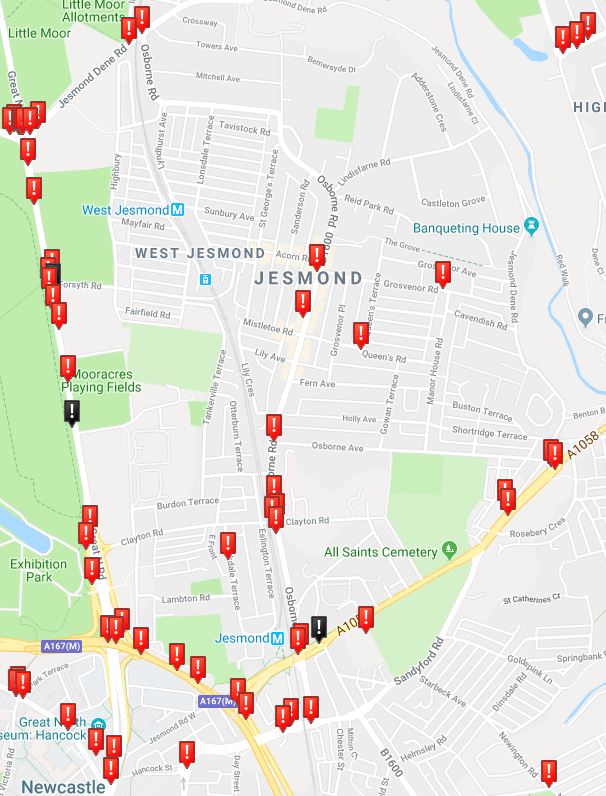 Pledge 2. Air pollution in Newcastle brought within legal limits as soon as possible.

In the last official figures from 2016, both Gosforth and City Centre Air Quality Management Areas (which stretches along Jesmond Road to Heaton) were in breach of the legal limits that should have been met by 2010. Bringing air pollution within legal limits as soon as possible is actually a legal requirement and Newcastle City Council has been mandated by DEFRA to produce a plan to do this by the end of 2018. Our expectation is that legal limits in Newcastle can be achieved by 2020 however that will depend on the detailed modelling currently being undertaken by the Council.

Air pollution affects everyone but it affects the young and the old the most. In Newcastle it has been estimated that 124 lives are lost every year as a result of illegal air pollution just for nitrogen dioxide with particulate matter likely to be responsible for more still. As well as causing early deaths, air pollution is also known to be a major cause of heart disease, lung disease, cancer and has been shown to be responsible for birth defects and cognitive delay in children.

In a recent report, the Royal College of Physicians has recommended that to protect public health, the UK adopt even more ambitious targets than the current legal limits and we hope Newcastle will adopt and work towards meeting those more challenging targets.

Given this is a legal requirement that the Council must meet we expect all candidates will sign up to this pledge.

Pledge 3. Residential streets that are pleasant, safe and attractive places to live and where children can play out without fear of traffic.

Streets aren’t just about movement of traffic. They are also where we live, shop and socialise, and for children also where they are most likely to play outside near their homes.

Some streets in Jesmond are suitable for children to play out but many are not. Jesmond is permeable to motor traffic wishing to avoid the Coast Road (A1058 Jesmond Road) and since the closure of Jesmond Dene Road rat-running occurs through residential streets. Similarly, Osborne Road – a residential street – is used as a “relief valve” for traffic on the Great North Road, despite electoral candidates for Jesmond agreeing in 2014 that Osborne Road should be for access only.

As a result we don’t see as many children playing out as we might expect and certainly a lot fewer than we when were children ourselves. Parents cannot be blamed for keeping their children indoors with such high volumes of traffic.

Low-traffic neighbourhoods with streets that are safe for children are better for everyone with less noise, less danger and cleaner air.  It’s even been shown that people living on streets with less traffic have more friends and a better social life than those that live on streets with heavy traffic. This is no laughing matter when loneliness is now considered such a serious issue that the Government has appointed a Minister for Loneliness to create a national loneliness strategy.

As with pledge 1, it will be for local residents to judge whether a street is pleasant, safe and attractive and where children can play out without fear of traffic. We hope to work with Councillors who sign up to this pledge to engage with local residents who have concerns about  traffic-related issues to look at options for how this objective can be met for their street.

Pledge 4. Rapid implementation of temporary changes to trial interventions in support of these objectives.

If Pledges 1-3 are to mean anything there must be some meaningful and urgent action as a result. Often changes involving traffic are controversial with long and heated debates about the likely consequences of a change. Yet other cities have shown that there is a different way, with trial interventions that can be implemented quickly that let people experience what will happen without any permanent commitment being made.

Using trials as part of a range of interventions helps inform the debate as people can see the benefits for themselves, and if there are issues with the trial then they can be stated factually with councillors and residents then able to work together to resolve or mitigate those issues.

Clearly not all issues can be resolved straight away but we hope to work with Councillors and other members of the community to identify and prioritise the areas of greatest concern, where trials might receive the most support and have the greatest benefit.

Pledge 5. Constructive community engagement about how to address the public health impacts of travel and the benefits of active travel.

Making streets safer and cutting air pollution should be objectives that everyone supports, but it is still important that the council and local councillors engage with the community to ensure that residents understand what the issues are and have a chance to help solve those issues. Air pollution in particular is invisible and we’ve found that many people haven’t been aware that it has been, and continues to be, a problem in Jesmond. Nor are people generally aware of the very serious health impact of sedentary lifestyles which cost taxpayers billions of pounds every year and are responsible for even more early deaths than air pollution.

These five pledges are based on SPACE for Jesmond’s objectives* which you can see on our home page. We welcome input from candidates about how they will go about meeting other aspects of those objectives to make streets in Jesmond more healthy, liveable, accessible and safe for everyone of all ages and abilities.

Our thanks go to our neighbouring group, SPACE for Gosforth, in helping to put this information together.

*Please note that at the time of writing our objectives are temporary and may be further refined to reflect Jesmond’s specific needs.

Ministers Urged to Support Active School Travel
Campaigning by a Councillor? It can happen!