Air Quality is an issue which has been getting a lot of press recently. On the back of the Volkswagen scandal there has been increased public scrutiny of what is coming out of the tailpipe of motor vehicles. However, while there is a focus from certain sectors on cleaner, greener cars there are many journeys which we can make on foot or bike instead, with all the well documented benefits this brings. Providing local evidence of pollution levels can help make the case for prioritising walking and cycling in Jesmond, but this is not possible to do without specialist equipment…

To try and quantify pollution in Jesmond, SPACEforJesmond have taken the opportunity to work with Sense My Street, a project run by Aare Puussaar at Newcastle University’s Open Lab.

I spent December 2017 walking around Jesmond with a Fidas Frog portable Air Quality monitor and a GPS tracker, to find out what the Air Quality is like in Jesmond, and importantly, how this changes in particular streets, especially at busy times. An area of focus was West Jesmond Primary School on Tankerville Terrace, around school run time. Tankerville Terrace is often very busy and at some times, a complete standstill. There are often idling vehicles which become backed up along the length of the street.

While Petrol and Diesel vehicles produce pollutants of varying types, the Frog measures particulate matter (PM) – very fine dust which is emitted as a by-product of diesel combustion among other things.

The results are now available, and very interesting. 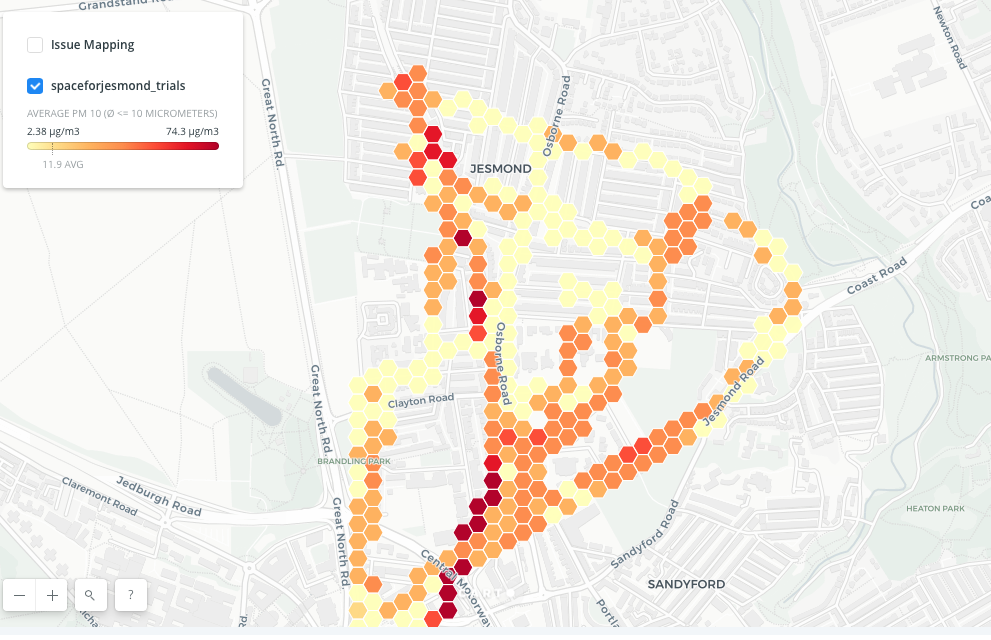 Note: The colour gradient does not indicate anything dangerous or illegal about the measurement. The World Health Organisation do not have a “safe limit” for PM exposure and EU legal levels are not measured using the method employed here.

It is possible to see various “hotspots” on the map. These are:

To get a fuller picture of PM levels in Jesmond would require more intensive monitoring, but as an indicator of the exposure I have as a commuter on the school run, it seems that the further away from the traffic I am, the lower my exposure – which is exactly what we would expect. So, to lower my exposure, I can try and avoid the main roads.

However, two of the “hotspots” are around schools, and there’s no way that children can avoid these areas. The only way to improve the air quality is to reduce the amount of motor traffic near the school, and to do that, we need to shift more journeys to walking, scooting, cycling and public transport.